Should it be possible to create new inline models within the structured field editor?

While trying to create a new model to be inlined to a structured content field, I ran across two issues, first of which I would consider a bug, the second an inconvenience.

This seems to completely break the editing flow if other than blocks need to be inlined. Is this the expected behavior for now or have I discovered a bug? At the very least, I’d expect for the create button to be removed from the dialog.

Thank you for letting us know!

Thank you once again for the feedback!

What has been the tradition on this forum to mark an issue fixed (or a question answered)?

Normally we leave the issue open in case someone has a related question to the thread. The only exception being feature requests, that are marked as launched and locked once they are released

I agree it sounds like a good idea to keep the threads open to collect related discussions in the same place. I still believe it would benefit both you and the community members to quickly be able to spot if a question is still open.

Another thing to consider is the fact some readers might be here to check if the quality/speed of support matches their expectations. At least this is what I did as part of an evaluation of different options. Currently it looks like there’s just a ton of unanswered questions if only doing a quick check.

I would suggest something like Node-RED community forum has configured on their Discourse instance: General - Node-RED Forum. The original post creator can mark an answer as the solution (similarly as in e.g.StackOverflow).

Hey @ristomatti thank you for the feedback. How do you evaluate the unanswered questions? We don’t respond to all the feature requests, or maybe integrations with tools that we don’t know, but the support requests look good to me?

Thank you very much anyway for the interesting perspective you are giving us.

Also, just to give another perspective that you might not be aware of, sometimes support requests are sent in parallel here, an via the support email, so maybe it’s not answered here, but privately yes.

We don’t respond to all the feature requests, or maybe integrations with tools that we don’t know, but the support requests look good to me?

Just to avoid misunderstandings, I was only talking about the Support category but I guess this could apply to pretty much any post (except for feature requests) that ends up in a question mark.

Also, just to give another perspective that you might not be aware of, sometimes support requests are sent in parallel here, an via the support email, so maybe it’s not answered here, but privately yes.

I am aware of this

. My suggestion is more related to first impression to new users but also about spottng potentially useful tips when reading the forum. I don’t have time to read everything on the forum. Still I’ve found useful tips or caveats for later phases of the development. E.g. questions I did not yet need to ask or finding out some feature I’ve expected to exist does not.

How do you evaluate the unanswered questions?

To turn the situation around, which topics stand out to you when you glance over this list? 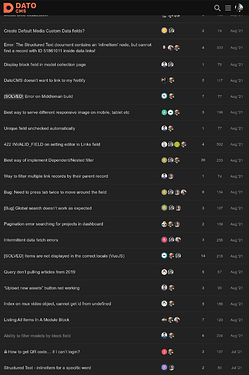 To give you an idea of what my eyes fixate on when I glance over the list of topics, here’s the same screenshot with color markings. Red marks things that pop up in a negative manner, green marks either reassuring/positive signals or topics worth reading more carefully. 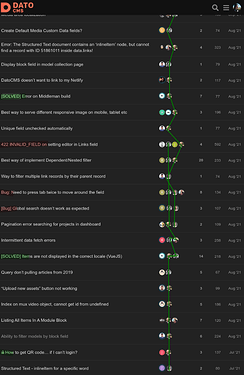 The dark green line is something I can see now after following the forum for some time but might not have noticed initially.

(Sorry for the difficult to see higlights, I’ll need to find a better screenshot annotation tool…)

Just to avoid misunderstandings, I was only talking about the Support category but I guess this could apply to pretty much any post (except for feature requests) that ends up in a question mark.

I’m not sure if I’m getting this, sorry

To me looks like we get back on every support request here on Community. I’m not sure where you see the “ton of unanswered questions”. They are not marked in any way, but we answer to them. The “[Solved]” that you see around are added by the users themselves, it’s not something that we do. Do you expect something like this? I didn’t think about this, but it could make sense, we might close the topics if it’s solved or stale?

And about the screenshot, I see a long green line

It shows that we respond to everything, isn’t it? We don’t have a policy of closing support topics, which might make sense, but if you open the topics you should see that all the requests are handled?

Thank you so much for giving your perspective on this!

It seems like I did a poor job on the screenshot

. What I tried to say is that when I initially looked at the forum support category, I only glanced over the topics and did not notice most questions have been followed up. It was only after reading the forum later on that I began to remember which profile thumbnails are Dato employees. Note that based on my profile data, I’ve already spent 5h on the forum, I doubt pretty much no-one would spend that much time when evaluating the platform

I’ve still got a couple of arguments left:

I see. I think you are right, we should do something better on the support side here.

I’ll note it down and we’ll change this soon. Thank you very much for your feedback. Very appreciated!

As suggested earlier, I’ve found the plugin(?) used on Node-RED community forum to be pretty much perfect for this purpose. I’m 99% sure it’s this one: Discourse Solved (Accepted answer plugin) - plugin - Discourse Meta

Backstory: There’s a bunch of very active and helpful community members on the Node-RED forum. One of the most active members even recently joined the dev team. A lot of this has to do with careful moderation done by the core developers themselves but the fact it’s an OSS tool that tends to appeal to retired engineers with a lot of free time likely playes a role on this as well.

hey @ristomatti I’m just reporting back that we have installed the plugin and we are going to mark as solved the discussions in the support category.

Thank you very much for the suggestion, makes things easier to understand