Not sure if it’s a bug or just a consequence of some updates… When I used to enter metadata on my blog post, the characters were counted - so If I entered a short title I could still see how many characters I have left for my limit, and if my titles and descriptions were too long, it used to show me how much character exceeds the limit.

I attached a picture and circled the numbers that used to change, but now it only shows what’s the limit.

This feature is not crucial, but it was a nice one to have since I didn’t have to check my character count on other online tools. If you could activate it back I would be extremely grateful 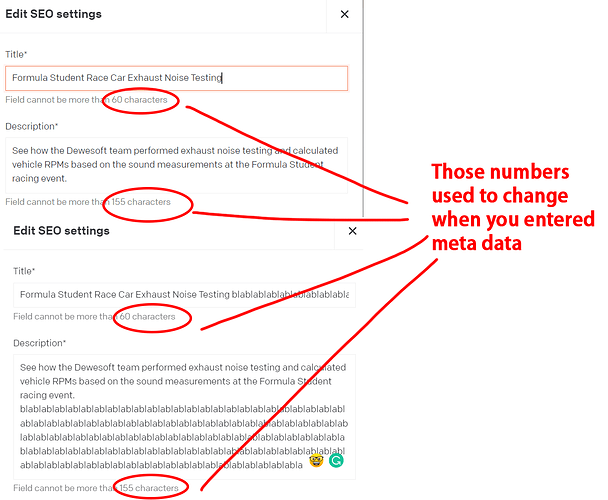 You are right, after some internal discussion we decided to turn that functionality into a plugin: Character counter - Plugins - DatoCMS for both simplification of our internal systems as well as giving more option, and simplicity to the dashboard layout.

By installing that plugin you will have that full functionality back, as you expect it

@m.finamor Any special reason the plugin doesn’t work SEO meta tags title/description fields where it’s needed the most? We limit character count on those fields to suggested lengths by SEO experts, so that translators and editors keep them within optimal limits. The counter helps them optimising the meta title/descriptions…

@primoz.rome You’re right, since those fields are inside a modal the plugin can’t count the characters there as you said.
We’re gonna look into the possibility of somehow adding it to SEO fields as well and get back to you.

Thank you for the feedback!